Skip to content
Posted on February 12, 2019 by Angel Navarro

The New York Giants had a year that could have been really bad but the second half they were able to make the year look not as bad. The finished the season 5-11.

As a Giants fan this was year that made see a lot more bad than good. Some games the offense won’t score until its too late or the defense knows what play is coming and they still can not stop it. 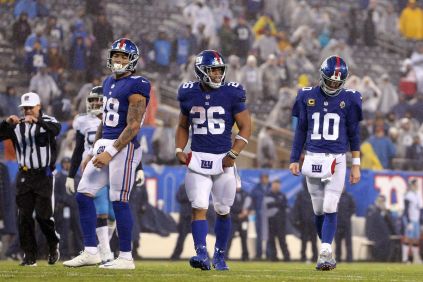 Going free agency this year the Giants will have 28 million to play with. The could get it to 48 million if they release the following players DE Olivier Vernon, CB Janoris Jenkins, LB Connor Barwin, RB Johnathan Stewart. This money could go up even more if they let go of QB Eli Manning.

Head Coach Pat Shurmur has come out and said that Eli is his guys for 2019. SO the Giants might not even draft a quarterback this year.

Going into free agency I expect the Giants to stick with the 28 million because 3 of those 4 players are on defense which is where the need help outside of the offensive line.

I expect the Giants to target only Daryl Williams in free agency because they need to resign Safety Landon Collins and Guard Jamon Brown.

I think they will address  all the important issues in the draft.

I’m going off of what Pat Shurmur said, he is does stay with Eli this is the draft. If not I think they will draft QB Dwayne Haskins in the 1st round.

The Giants have had problems at linebacker for the past 5 years and they have not had one they can rely every week. They will draft O-line because the line last year was awful, and I do think they will draft a wide receiver because they are thin at receiver.