Skip to content
Posted on February 12, 2019 by Angel Navarro

Now that we are past the NBA trade deadline and the buyouts are on the verge people still think the Golden State Warriors are going to be dethrone.

That is not true. The Warriors are going to win the title this year and there is nothing no team can do. Last year we all knew the Houston Rockets had a chance to beat the Warriors and they didn’t they lost in game 7 of the Western Conference Finals. 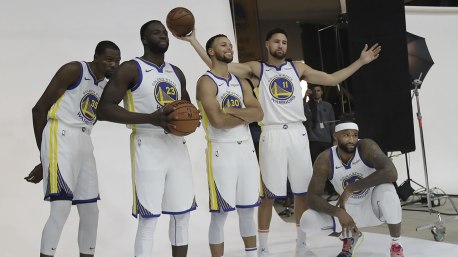 This past offseason the Warriors sign DeMarcus Cousins making their starting five an All Star game line-up. Just look at the way the Warriors play when all five of them are on the court.

They are unbeatable they only lost one game in their last 15 games. They score as little as 112 point a night. Some nights they will go over 130, that’s insane.

The only team people think that can beat the Warriors are the Toronto Raptors and the Philadelphia 76ers. The Raptors have a good team but they have not faced the Warriors at full strength.

The Raptors have Kawhi Leonard and thats it, Kyle Lowry has struggled in the playoffs his whole career imagine him in the finals.

No they can’t the only time we have seen Warriors fall this year is when Klay Thompson and Steph Curry have an off night and only score about 25 pints combine. Yeah no team can’t beat the Warriors.