Skip to content
Posted on March 13, 2019 by Angel Navarro

Earlier this morning news broke that running back Le’Veon Bell will  sign with the New York Jets.

The deal is a 4 years for 52.5 million dollars with 35 million guaranteed. It will be 13 million a year for Bell which will make him the second highest paid running back in football behind Los Angeles Rams Todd Gurley who is making 14 a year.

I think it is a solid deal but I think Bell could have gotten a better deal else where. Credit to the Jets because they did not spend that much for him. 13 million a year is good but the way Bell was talking he said like if he was going to get over 15 a year. 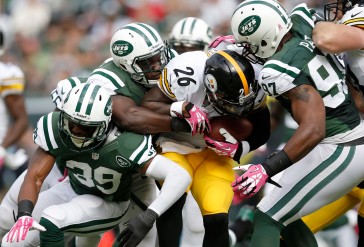 I think the Jets and Bell are both winners in this deal because not many running backs at his age get this kind of deal at all most teams low ball running backs.

Bell is getting a really a good amount of money which for his future is good plus he will have endorsements now that Odell Beckham Jr is no longer in New York.

So maybe Bell might get close to 40 million in guaranteed money. I expect him to have tons of endorsements that will get him the extra 5 million.

Another winner in this deal is quarterback Sam Darnold. With Bell in that backfield he can check down to Bell if their is no open receiver. Now he has a running back that he can trust so I do believe his development will boost a lot this year.