Skip to content
Posted on April 6, 2019 by Angel Navarro

Last night Oklahoma City Thunder Russell Westbrook got enough rebounds and assists to average a triple-double for the rest of the season.

This makes it THREE YEARS STRAIGHT he did this. He has officially claimed the title of Mr.Triple-Double, I know he does not have the most triple doubles in NBA history.

But even the great Oscar Robertson was only to average a triple-double for only one season. Robertson has a total of 181 triple-doubles, Westbrook has 135. 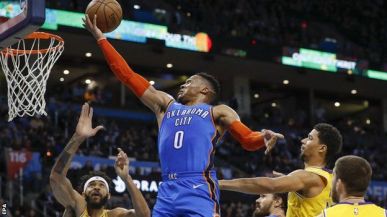 He is only 46 away.I do believe he will surpass him on the triple-doubles list before he retires.

Russell Westbrook athleticism and passion play a big factor in his ability to get triple-double. I think his passion is the biggest factor because he will do anything in order to help his team win.

He will get rebounds if he knows the big men are having trouble, find hot hands to defer the ball to and score at will in order to win.

This is an historical event to the NBA, most people are not taking that serious because we are use to seeing Westbrook doing this all the time.

The worst part no one is going to appreciate this feat until the day he retires. We are not going to see this happen again people. Most point guards now only focus on scoring and assists.

None real consider getting rebounds unless they know they are close to getting a triple-double.

Westbrook is Mr.Triple-Double because he can do everything.