This was a heartbreaking season for the New York Yankees. They finished with one of the best records in all of baseball and got to the ALCS only to lose to the Houston Astros on a walk-off 2-run homer by Jose Altuve.

In order for that not to happen again, the Yankees need to make some serious changes in the coaching staff and players.

Here is my Yankees offseason wishlist:

5. Get a couple of left-handed bats

We all know the Yankees have some of the most powerful right-handed bats but where are the left-handed bats.

Aaron Hicks who will be out for a certain amount of time because of Tommy John surgery and Brett Gardner if they resign him. So, the Yankees do need to add a lefty in their lineup.

When it comes to fixing the coaching the Yankees got off to a good start by parting ways with pitching coach Larry Rothschild and hiring Matt Blake who was the pitching coach for the Cleveland Indians.

Blake did a great job in Cleveland, by helping pitchers like Shane Bieber become an All-Star. If Blake can help develop Luis Severino and Domingo German, the starting pitching staff for the Yankees can be a lot stronger in the 2020 season.

But still, the biggest concern on the Yankees coaching staff is manager Aaron Boone. He is not a good manager at all, people might not see it because of the year the Yankees had winning 103 games and finishing in 1st place in their division.

But let’s not forget what Boone has done in these last two playoff runs. He mismanaged the whole bullpen and did not make any adjustments in the starting lineup. You can read more of why Boone is not a good manager here   The Real reason why the Yankees lost 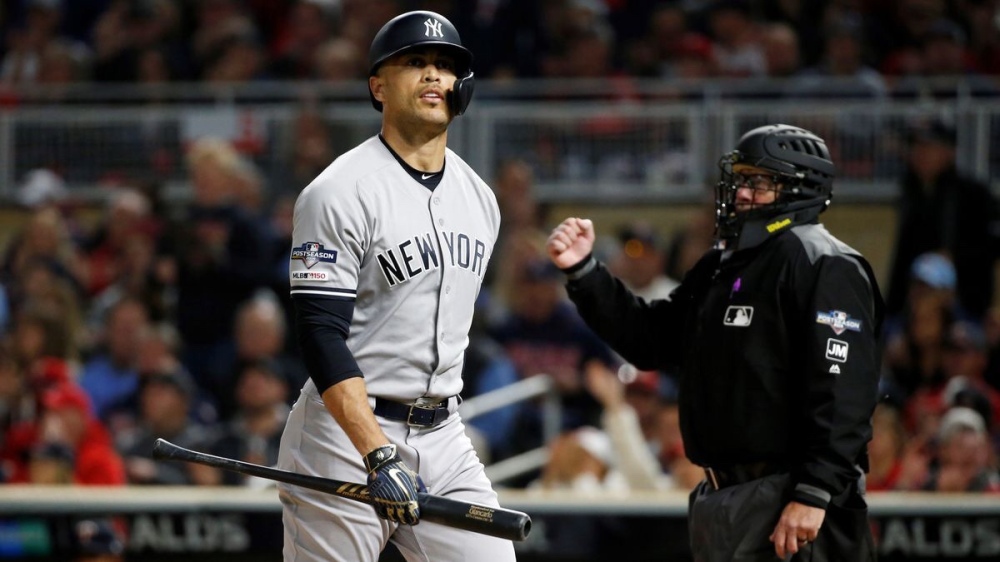 Yankees fans went crazy in a good way when they heard Giancarlo Stanton was traded to the Yankees on December 11, 2017.  Most Yankees fans at the time loved the trade, but I didn’t.

I told people that the Yankees are going to regret trading for him. Now, most Yankees fans want him out because of his contract and the way he plays in big games.

Stanton was a no show during the 2018 playoffs. He batted .222 against the Boston Red Sox in the Divison Series. Watch all those games again and look at the situation of the game when he got all four of his hits, then watch him bat when there are runners in scoring position.

The Yankees need to get rid of him so they use that money to get that number one starting pitcher they have been needing for years.

Yankees fans fell in love with DJ LaMahieu this last season because of consistent play at the plate and on the field. Whit Merrifield plays that exact same game, he will bat around .300 with around 15 home runs, 40 doubles, and 200 hits.

Merrifield is one of the best all-around players in all of baseball.

Now some of you are going to ask where he will play because he is currently playing second base for the Kansas City Royals. Some of you might not know that he can also play outfield. Merrifield can play multiple positions which makes him extremely valuable.

The best part about Merrifield is that he is still under contract for four more years. Merrifield cap hit won’t be more than 7 million a year. That is great for a player who is in his prime. The knock-on him is his age because he will be 31 years-old in January.

If the Yankees want more consistency in their hitting they need to go after Merrifield.

Signing Gerrit Cole should hands down be the top priority for the Yankees this offseason.  In the last two offseasons, the Yankees had multiple opportunities to get an ace for their pitching rotation but they have failed to do so.

Yes, James Paxton looked like an ace in the second half of the season but can Yankees rely on him to stay healthy.

The Yankees don’t have to worry about that with Cole. He averages close to 30 starts a year over the last five seasons.

Cole has been one of the most dominant pitchers in baseball these past two seasons. The Yankees need a pitcher they can say “I don’t care who we’re facing as long as he is pitching”.

View all posts by angelnavarrojr2